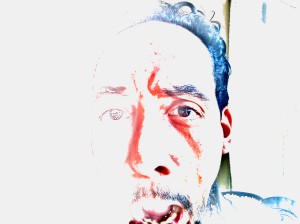 …He kissed Cary again, who now lay in his hospital bed – covers up to his eyes, terrified, praying and hoping for something, muttering to himself.

And the room was cold and the wind outside started to howl and the wheel in the psychedelic junkyard kept spinning and he thought he saw Redd Foxx leap out from behind a wall of cranberry and there was no theme music, no laughter, no religious applause, , no Gold no Geld no Guilt no signs of warnings no trees and no stump, just poor Nancy in a corner intoxicating herself with crayolas and Freddy doing his Little Sid Vicious and the Plastic Man’s broken legs and Cary’s broken heart and the nurses’ twisted souls and the doctor’s bloated pockets and it was all just too…

He felt now he was going to die. Someone was going to die.
There were people dying at that very moment clutching a rock or a stone, swallowing sand, or trying to fight the Beginning of Time. Noble causes and desires.