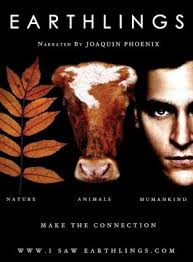 Earthlings was narrated by Joaquin Phoenix

Art/activism has no teeth. We don’t bite into people’s souls or brains. And we need to.

Shaun Monson, director of the documentary film Earthlings is an excellent example of this as far as journalism is concerned and, frankly, in terms of art as a revolutionary force. He seems to be a genuine, no-holds-barred social explorer who has revealed something so horrible, so vile that he makes dramatic filmmakers who supposedly explore “dangerous” and “taboo” subjects in their narrative movies — seem tame, perfunctory, and stale. Earthlings’ ugliness invites your soul in…and it makes one confront himself. It forces man to look at himself, it holds a true mirror up to nature and reveals every scabrous sore, boil, and blemish our soul contains. Earthlings not only depicts the horror human beings inflict on animals (food industry, circus’, clothing, etc) — it is a grossly disturbing portrait of who WE are. It is the real Picture of Dorian Gray pulled out of the wardrobe and held under the sun. The terrifying footage collated here rivals anything by Chris Marker in its political urgency and is more intense and searing than anything Oliver Stone or Darren Aronofsky could have produced. But this film is even simpler than that: it is a humane movie with a humane purpose. Anyone who eats commercially produced meat from slaughterhouses after this needs to not get their heads checked…but their soul.

(When will the so-called Left understand that we are walking in very high cotton…we are in some disturbing times? Jokes and shallow self-congratulatory remarks and pats on the back are not what we need. John Stewart and Bill Maher’s lame commentaries do not fight the very problems we face or thin out the shadows of the forces that blind us.)

But that is not because Moore is mean-spirited or doesn’t care. It is simply that he doesn’t care enough. And because he doesn’t truly believe he is — or can be – truly affected by the subjects or ideas in his films. Moore, like so many of the so-called Liberal’s Heroes who, supposedly, like to shake up Middle-Class America and shock us about political and social realities (Lee, Tarantino, Stone, Jay-Z, etc) is just not a man of passion.

Earthlings is like a great punk-rock song, it is like an Animal Rights’ Native Son, in the sense that it seeks to destroy preconceptions, fantasies, and false views. (Read Richard Wright‘s introductory note on the writing of Native Son — his intention was to make racists fall to their feet, choke themselves — if not the book itself. He didn’t want his book to be “liked,” he wanted the proponents of racism to be stunned into having a soul…) Earthlings attempts to do this – resulting in its status as possibly the hardest film anyone will ever have the privilege of watching. And it is done with the fervor, insistence, and hope that Sue Coe imbues her paintings and illustrations of animal abuse and human depravity. Coe wants to reach out and bend your spleen. So does Monson’s documentary. And we need this now more than ever.

I don’t know of many contemporary popular films or works of music that do this. Poetry, although no longer even published on the underground as it was 40 years ago, still does it. Painting, too. Because of their personal approaches, but film and drama has no rancor or liberating spirit. Because it wants too many awards.

May our teeth be steely and vigilant in the shallow flesh of man’s brain! And may the artist/truth seeker take center stage again in our culture’s exploration of itself. We are there, folks, underneath your blankets.
We live with you, we know how far the shadows stretch and it is our mission to not only measure the crawling darkness across the floor, but the growing shallow end of the pool marked “humanity.”
It was just 6 centuries ago when the water fell…
The sadism reared it’s ugly head for a great big bite with the decimation of the Indian and its folly fell into blinding glee with the last days of chattel slavery.

But it still exists as the lynch-pin and the base of all our constructions.

You must ask yourself: What do you eat? Why do you eat it? Where does your food come from? And how can we allow the suffering and torture of millions of living creatures to go on so that we can “eat”? Call it muckracking, revolutionary art, propaganda, Hippie-agitation, Vegan-psychosis, whatever the hell you want to label Earthlings and the energy it will, inevitably, bring up. But one thing for sure is this: there is not one person on the planet who can or should turn a blind eye to what we are doing to the animals of our planet, the environment, and ourselves.

Take it from me, folks. There’s no proselytizer like a convert. As a former meat-eater, I can admit and understand the unwillingness to look at what we are actually doing to animals. I lied about it for many years. It wasn’t until I wrote and released “Lying Meat,” a collection of poems and meditations on the nature of man’s cruelty and hypocrisy (including my own) that I was able to fully develop and allow my consciousness to expand: I had to point the finger at myself. Man lies to himself every day, in fact — he must, to a certain degree. If he didn’t he’d never have the ability to function past twelve o’clock noon. But to continue this charade is to perpetuate the system of torture and mind-control that institutions forcibly instill. How many white people knew very well what was still happening to blacks in the United States in 1950 but did nothing about it? How many white people knew about lynchings that were being committed against other human beings and did nothing? How many blacks did nothing? How many men know about rape but cease to take action and confront the perpetrators or at least try to be more responsible and try to evoke a more progressive outlook in their son’s eyes by? This would at least help fight some of the misogyny in our life, no?

Well, I urge every meat eater alone — just the meat eaters — to take a step back and watch this film. We need to start somewhere, but don’t you, dear reader, feel as if man is doomed to always having to “re-invent the wheel?” What is wrong with us?

I don’t write this as an insistence to be angry. I write this as an insistence to be sad. Very very sad. Mourn not for what we may do to the animals on this planet, but what we do to our own innate sense of right and wrong. Because while man has found its way, very conveniently, to try to justify such an abomination such as slavery or genocide — we know seek to spit and chew on the remains of our corrupted human soul by applying these pathological defenses to everything: supporting politicians, war, drones, insurance companies, bank bailouts, racism, sexism. Even child abuse. So I urge you to mourn for the human spirit that may never be what we want it to be. Be honest with yourself so you can be honest with your world. Earthlings has reminded me of this. It is a true “soul” film — as in a movie that has soul and encourages the inner reflections of a writhing soul.

As we have a tremendous catalog of “soul music”, perhaps we need “soul cinema” (regardless of religion or political affiliation — which is all a mirage at the end of the day, a convenient way for man to delude himself and NOT take responsibility). True expressions of the soul is what art is anyway Whatever makes us feel and reflect has soul. True journalism and activism makes us act. And while action will only take place when a boiling point has been reached, it can never occur unless the soul has been awakened. That is why revolutions shock — because they are the results of the spirit finally breaking free. The people in power don’t believe that “the people” are actually in touch with…themselves. They are shocked when they “feel” their oppression. This is implicit in our society, our phony intellectual NY Times East Coast Liberal Arts Collegiate bullshit. They preach: sympathy, but not empathy. They encourage “thinking” but not “feeling” — making the dangerous assumption that they are not one and the same.

I applaud Shaun Monson. I admire his talent, but it was his unfettered ability to see this project through. And it is the un-popular underdog who often has the biggest impact. Lincoln Steffens, Upton Sinclair, John Brown, Thoreau, Nat Turner, Harriet Tubman — these are just a small handful of names of Americans who have taken risks to bring truth and justice and humanity to light. With the death of Pete Seeger and Amiri Baraka within the first month of 2014, Monson has reminded me that truth and creativity and determination are not dead, are not museum pieces — but living breathing concepts in the air. But it ain’t easy. And it is getting harder and harder to connect to people, to engage in dialogue, to engage in dialectics, to even…cut through our own sheer stupidity.

Monson’s film is hard-hitting and not easy to take. But “no pain, no gain” — that applies to art as well as athletics. Frederick Douglass said if there’s no struggle then there is no progress. Well at this moment we must struggle within ourselves and at ourselves — without a vanity mirror. We can learn a lot about our savagery by watching Earthlings. More importantly, if you are still able to feel or think in this 21st Century Circus, Earthlings will encourage you to never give in to apathy or vulgar commercialism and sadistic violence. Three things the corporations of the world and our own United States Government want us to not only accept — but believe in.

Shame on us all.