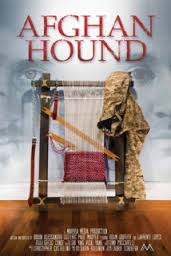 A New Director has made a powerful motion picture, which is now available to audiences on Netflix and Amazon Instant Video.

Brian Alessandro’s 2010 Afghan Hound opens with a shot of garbage. An indication of the mess that slowly forms when a white American war veteran and an Afghani carpet weaver’s lives intersect. Although understandably perceived as a film about a PTSD and a Vet’s struggle to come to grips with the horror he inflicted in Afghanistan at the start of America’s invasion shortly after September 11, 2001 — the film is less a portrait of PTSD and more an illustration of the warped relationship America and historic white racism have with the Oppressed and colonized. It is set in the here and now, within the fray of the 21st century circus and the themes of white guilt, war crimes (an oxymoron if there ever was one), revenge, and punishment could be applied to just about any time period in modern man’s consciousness. Chris Leeds (Adam M. Griffith in an impressive performance) is a veteran trying to resolve and accept the horror he inflicted and experienced as a soldier in Afghanistan. He is reflective, introverted, and fragile when we meet him and yet at least he seems to be able to support himself – he’s a carpenter. And while he may not be Jewish, he is a Catholic and the suffering he must endure is rite of passage ritual into a state of grace. He is 33, like Christ was when he was crucified. Although it is not a primary aspect of the film, it is wholly un-subtle. Is Alessandro implying that Americans (i.e. “white people”) must suffer to the depths in order somehow be reborn, be cleansed, be…treated for their institutional philosophy of militancy and imperialism? Whether at home or abroad, white America has its nose in everything and dictates to everyone under the sun. Except to itself.

Enter: Zemar – spookily interpreted by Lavrenti Lopes. Zemar is the Afghanistan-American (he grew up in Flushing) who initially befriends Chris (they swap trades, Zemar teaches Chris about rug weaving, who in turn gets lessons in carpentry). Their exchange of energies and ideas is affirmative and creative as they both build things…and yet, as Zemar reminds us: “Everything begins with philosophy.” Which, of course, means that there is an inherent idea behind any organized act or decision. And how we render those actions is based on ones philosophy. It is quite clear that the director wanted it to be known that America’s treatment of “the other” and its own soldiers – is quite a conscious act.

I wrote earlier that Afghan Hound is not really about PTSD in my opinion – as that skirts the issue. It is about the recognition of guilt and admission of sin. And how a white man willingly accepts his punishment – even if only it allows him to feel something stable and “real.” This is no coincidence or something to be taken lightly. The white man – cut off from his own center, his own “soul” as it were must always go to the “natives” to feel something. He must always be led, taught, entertained, or forgiven by a person of color in order to be free of his burden, his shame. He has been going to the black man for his music for centuries now – because it enables him to feel. But what he can’t seem to do is actually forgive himself. People of color throughout the world do nothing but forgive. It’s not that the colonized don’t know who they are — it is perhaps that the colonizer doesn’t know or can’t admit who he is. And the Chris Leeds of the world wouldn’t know where or how to begin to forgive…themselves. Their world is too unstable.

In one of the film’s most genuinely moving scenes, Chris announces to his friends and family — after imploring them for their American nationalism in which he excoriates everything from the A Bomb to Britney Spears – “at least the sunset is trustworthy.” He knows it’s the only thing man can rely on, the one constant that may never change and it is an emotional sunset or sunrise that he needs, he needs something to lean against that he can rely on. Zemar becomes his sunset.

It is when Zemar begins pursuing revenge on Chris that the film takes a surrealistically absurd turn. Alessandro powerfully crafts elements of Sam Fuller and Pasolini into what emerges as a kind of delicate ‘Theater of Torture’ – all executed and inflicted by Zemar who shows himself to be quite the guerilla sadist. And this is the power of Alessandro’s directing – he expresses the terrifying fact that even the oppressed’s ability to enact a reasonable or rational act of revenge – has been corrupted!

Maya Angelou once wrote that she did not believe that blacks would treat whites the same if they were in positions of power and if their roles in western society had been reversed. She wrote this in reference to Jean Genet’s play “The Blacks” (which she appeared in originally) and while she may or may not be right, in the case of Afghan Hound – revenge is something Chris wants Zemar to have and, once again like a good sacrificial lamb – he offers himself and exposes himself to Zemar’s bizarre, yet benign, S&M fantasies (the scene where Zemar rubs his hands over Chris’ combat uniform as if to indicate the homo-eroticism of Fascist military fatigues is excellent). Zemar wants this white imperialist to suffer, to be punished, to be abused…and yet for all the debasing he does – it is Zemar who comes off appearing more warped than Chris, thereby endowing Chris with more sensitivity, almost in a strange way letting him (the white audience) off the hook, since the empathy is given more to him than to Zemar. If there is a criticism I have of Afghan Hound it is that.

Lopes bothered me half way into the film, he was too cocky and his cat like prancing was off-putting at first. I also was uncomfortable for all the wrong reasons. As an African-American, I was delighted to see another man of color play a role that was complex and off-kilter. However, the “bitchiness” of the character bothered me, and at times bordered on a strange shifty eyed Arab stereotype via Peter Lorre – and yet in the last 10 minutes of the film Lopes finds a way of redeeming Zemar – not as a person – but as a character in the film. Because no matter no matter how “true to life” some movies’ people seem – one must not forget we are watching characters. And behind every character…is a philosophy.

Griffith did well as Chris – it’s a role Viggo Mortensen would’ve craved had he been 25 years younger. Griffith is a better actor, but there were times I did not believe his brooding. It would have been even more powerful if Griffith was more like his delusional white friends and had still been PRO-America and then gradually lost himself in Zemar’s Velvet Underground revenge games – discovering his own status as a racist imperialist and as a ‘pawn in the game’ but these are minor points and only ones I speak of in order to be fair and honorable to the film. To not be tough on a tough movie would be to dishonor it. And all works of art are flawed. It’s just that there are times when the artist must speak to his fellow artist and tell him exactly how his work stirred him and what questions it prompted. That’s how we all grow. It took great courage and talent to make Afghan Hound. For all his absurd “spiritual suffering” ethos, Scorsese couldn’t do it (he lacks the courage – plus he’s too busy making sure DiCaprio is brushing his teeth or God knows what) and neither could Aronofsky or any other establishment director who supposed to be known for taking risks and being honest.

American cinema does mirror the American society in that it is a socio-pathic, self-aggrandizing world that does little to change, challenge, or reflect on our history, mores, and accepted values. For this alone, Alessandro must be commended.

Final Note: Brian Alessandro’s use of wide-angle masters and subtle shifts in acting styles (look at the white American family the movie with that of the Afghani family, even the styles – within the perceived Naturalism – is different!) is effective and bristle with tension and a strange un-reconciled understanding. I am not sure how he achieved some of the things he did (which I am grateful for) but I know his work beckons repeated viewings and I hope he is a director who will continue to make honest and penetrating films.