“I don’t think I’ve ever read a more honest and profound document of self-discovery outside of the richest Pantheon our literature has to offer.
It single handedly rescues the notion of ‘confessional’ harkening back to Augustine and his ‘Confessions’, Villon’s Testament, Joyce and his ‘Portrait of the Artist as a Young Man’, and Malcolm X’s ‘Autobiography’. Kangalee reappraises the whole notion of who it is to be Dennis Leroy Kangalee while narrating his experience and enlightening us about the world he came from and that he and we now inhabit.”

— Carlo Parcelli, Poet/Author of The Canaanite Gospel: A Meditation on Empire 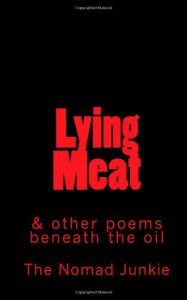 Returning from a 5 year self-imposed exile in 2006, Dennis Leroy Kangalee returned to NYC with a renewed commitment to his art. Lying Meat is the result. Written as “The Nomad Junkie” in the aftermath of a draconian lifestyle change (carnivore to herbivore!) and between the earthquake in Haiti and the Gulf Coast oil spill, it is a slim volume of urgent poems that seek to make sense of our state of affairs and indict a system that fosters social/historical lies and our acceptance of those lies.