There is no Memory, Just Malcom (and the Ghost of Meredith Hunter)

“I had a gun, yes Cause it drove me crazy To see white boys Making money – From my ancestors music; Was I planning on murd’rin? Not necessarily  But when Brian Jones said he walked with Bob Johnson The teeth in my head cringed: “Man, you’re a charlatan” Cause I’m Robert Johnson, My cousin’s Fred Hampton, My son is Bob Marley, And my feet are Michael Jackson;  I’m a stumbling playground in the dark a sobered addict who can’t get drunk –  If you want to meet the Devil, I’ll show him you In a mirror that refracts, All you see, think, & do –” 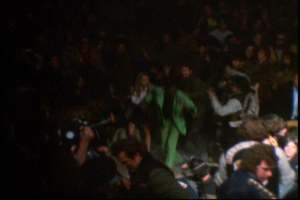 Meredith Hunter before his murder at Rolling Stones 1969 Altamont Concert

This was all I remember blaring from my cousin’s speaker; a sonic assault of sophisticated beats; finessed bass drum, and threatening guitars – all in righteous synchronicity against the foolish belief that the Rolling Stones had devised blues music.  I still did not understand Rap or Punk. But I knew if Malcolm X had been a punk poet perhaps he’d have been part of that crazy band; the way Pryor Electric’s guitar sounded it was as if the razor sharp acid humor of Malcolm had been tossing out the riffs. And those words…while I could not comprehend the literal or psychological implication of them– I had felt them deep down inside. I felt the same way about Chuck D many years later.  The same place where music beyond my intellectual grasp made sense in my gut. In the viscera.  The place I‘d visit repeatedly over the next decade and eventually reside…  It was the place my grandfather often took me to, in those rare drunken boat nights when Rimbaud was just as strident in his un-schooled heart as Malcolm X.  Grandpa fought during World War II, but the war he fought was an internal one and a far more domestic one.Not many paupers become princes. But Ralph Latimoore, hailing from a den of thieves and pimps from Port of Spain Trinidad, became known as the Mayor of Harlem just as the 1950’s wheezed its way into the Technicolor revolution known as Civil Rights – his barbershop in Harlem, comfortably on 114 and St. Nick – His red hands Cutting the red hair Of the man known as Malcolm X.  There was something boldly beautiful about Grandpa; a vase of flowers, Sam the Man Taylor’s “Harlem Nocturne” fumigating the soul on a Sunday morning, his insistence on good manners and saying “sir” (like Malcolm) , his take no prisoners attitude when defending the weak or oppressed.  Later in his life, he always said he was the weakest of them all – Because he hadn’t batted an eye the day he placed that fatal bet, The day he announced to his stewards in tow:  “I bet you twenty to one that man don’t make it to 40.” “Who? The muslin boy?” “Muslin’s a fabric, you fool – Red’s a Muslim.” “Eh-eh. And he ain’t no boy, nah. He’s Malcolm X. He’s a man. And that’s why they’ll make sure he don’t live to see 40.” “Well we over 40…” “We not a threat. Well. Not yet.”  They placed their bets. Two of the men thought Grandpa was paranoid.  He never spoke about Malcolm’s death, only that a profound silence and emptiness pervaded Harlem like an echo chamber of the soul, butterflies of the aorta.  He never placed a bet again and was absolutely convinced— that the system used his recklessness and apostate ways To kill one of America’s – And the world’s – Last shining prince: El-Hajj Malik El-Shabazz — Brother Malcolm X.  *(written for & originally published in “The Day After MLK” program/zine at the Nuyorican Poets Cafe, April 2014)

One thought on “There is no Memory, Just Malcom (and the Ghost of Meredith Hunter)”