What Happened to the Brother on the Block? (The NY Horror Vol.1) [story excerpt] 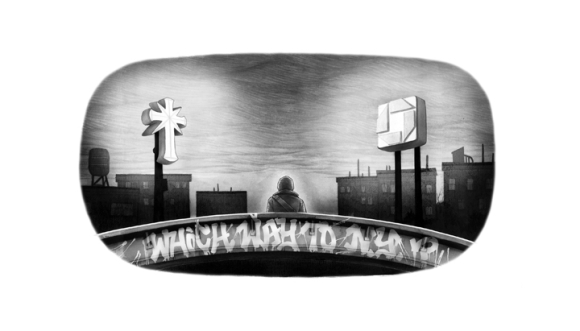 …And as he stood on the footbridge, overlooking the L.I.E, making his way over the foliage slithering through the cement that still managed to breathe outside of LaGuardia – he turned to face the Shea Stadium he always passed on his way home in his youth, instead he was confronted with a garish gleaming light that spat wasted electricity through the famous Rockefeller octagon – only it was the glaring red of the otherwise impotent graffiti, below, that caught his eye, which innocently asked: Which way to New York?

Leroy had the Church of Scientology on one side and JP Morgan Chase bank on the other.

He knew he was in trouble.

But he figured if he couldn’t find salvation in one, he could always find it in the other. After all, the other, and more ancient, religions had failed him interminably and maybe now it was time to get with the program: money or outer space.

He knew it wouldn’t matter, that no extra-terrestrial invasion would change a thing – regardless of whether we were or weren’t demons from another moon-planet or the swapped saliva under Tom Cruise’s armpit. His mother, ironing clothes when he came home from school, holding up and shaking the iron every time L. Ron Hubbard’s commercials came on – the volcanic eruption, the flowing lava on the screen: “What the hell did Dianetics ever do for Black folks!” she’d cry and as soon as the sales pitch vanished and Oprah’s face filled the screen – she would calm back down.

She was frantic for understanding and honesty and generosity. Especially when it concerned money. Other people’s money. This was probably why he felt as foreign from the Capitalists as he did from the Scientologists, but he’d better get with the program – quick – or he’ll be destroyed. Cause if the Aliens from Hollywood don’t save him, then money will. And if that doesn’t work there is always death. Because when you’ve got a bank you can’t join and a church you can’t believe in, then your options don’t seem that great.

“No, couldn’t be,” he said to himself every morning, “this couldn’t be the end…”

He knew it was, or could be, or would be and it scared him. He was desperate to make a connection.

On his first day back the adrenalin pumping only crystallized his prey. He turned on his heel, looked down the block, hoping to find another brother from Back in the Day.

One, named Creepy, was the type of brother you take for granted.

He was a record-keeping device with veins. Some kind of anthropological scout in the form of a camera that pumped blood.

He knew everything about Harlem and had seen all the changes. Which is why whenever he saw Leroy – he’d raise his fist:

And of course no one ever listened to him. He was not a prophet (he always said things would get better). The looming shadow that lurked over the corner he frequented proved that. The residents of his neighborhood had grown tired of his hallucinations and desired coffee instead.

Or at least that’s what the land developers said.

They had replaced the Brother on the block with a Starbucks and it was just the beginning of a very quick extermination. 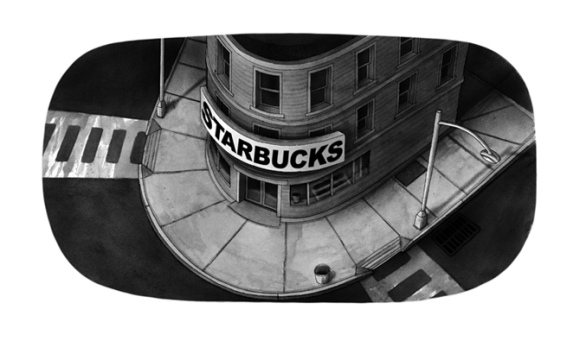 [An alternate version was originally published in “The Nerve Lantern”; then revised in the performance piece “Gentrified Minds: The NY Horror Vol.2”. This excerpt is from my spoken word text which can be heard here.]